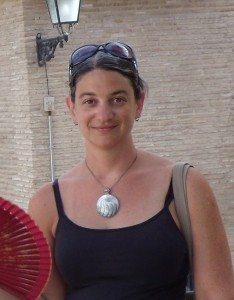 Amira Jarmakani works on questions of race, gender, ethnicity and representation in U.S. popular culture. Her most recent book, An Imperialist Love Story: Desert Romances and the War on Terror (NYU Press),  demonstrates how desire animates contemporary U.S. imperialism. Investigating the increased popularity of desert romances concurrent with the war on terror, the book demonstrates love to be a salient lens through which to understand how the war on terror works, and how it perseveres.

In her first book, Imagining Arab Womanhood​, she analyzed orientalist representations of Arab and Muslim womanhood in varied contexts, such as the 1893 Chicago World’s Fair, early twentieth century tobacco advertisements, contemporary advertisements and photographs, and the contemporary “American belly dance” movement. Looking at photographic albums and advertisements featuring belly dancers, veiled women, and harem imagery in comparative historical contexts, the book argues that they offer a shorthand for communicating social anxieties about expansionism, modernity, and the loss of the frontier at the turn of the 20th century, and about national security and the “new” (oil) frontier in the contemporary context.

An Imperialist Love Story: Desert Romances and the War on Terror

For more information about the book, please see the following online articles:
Wild Wild East
New Texts Out Now (Jadaliyya)
Romancing the Sheikh in the War on Terror: An Imperialist Love Story

“They Hate Our Freedom, But We Love Their Bellydance: The Spectacle of the Shimmy in Contemporary U.S. Culture.”  In Between the Middle East and the Americas: The Cultural Politics of Diaspora, eds. Ella Shohat and Evelyn Alsultany, 130-152.  Ann Arbor: University of Michigan Press, 2013.

Imagining Arab Womanhood: The Cultural Mythology of Veils, Harems, and Belly Dancers in the U.S.

“Teaching about Gender and Gender Justice in the Muslim World,” Understanding the Muslim World Symposium, Kennesaw State University, October 29, 2009. Click on links for general resources for teaching and bibliography of Arab and Islamic feminisms.